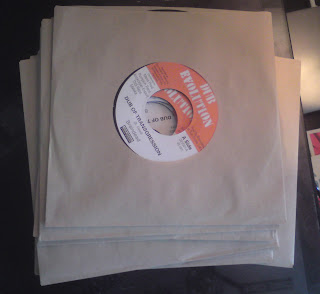 Our Dub EP is finally out!
Two killer Dub Tracks on a 45rpm 7", for the truest Dub Sound you can get!
A-Side is a Dub Version of the 'Weapons Of The Weak' album track 'City Of Transgression'.
B-Side is an unreleased instrumental track recorded live in the studio during the 'Weapons Of The Weak' sessions.
Limited to 333 pieces (213 of which went to the distributing labels), stamped and hand numbered.
Recorded analog, mastered analog, released analog...
The look matches the sound: the single comes in a brown bag sleeve with a large centre hole.

You can order it right here for 3,50€ + postage: braindeadpunk@gmx.de
Or get it from one of our labels:

Of course, you wanna know what you're buying, so have a listen here:
http://braindeadpunk.bandcamp.com/album/dub-evolution-7

In the meantime, we're working hard on getting our second full length ready which should be recorded this year still for an early 2013 release... fingers crossed!

Posted by BrainDead at 4:26 PM